Prompt: Why are we so afraid of reproductive technologies?” Who is “we?”

Systemic racism is a pattern which exists on all three levels. This pattern of systemic racism is made up of the aggregate action of small interpersonal racist microaggressions. These acts reinforce the larger system and do its work.

Systemic sexism is also a pattern which exists on all three levels. This pattern of systemic sexism is made up of the aggregate action of small interpersonal sexist microaggressions. These acts reinforce the larger system and do its work.

All systems of oppression are different but they all work in the same way.

In her book Down Girl, Kate Manne explains that microaggressions are what she calls “down-moves.” Or a move intended to confer that its target is not a subject, a person with agency, but rather an object without agency. Microaggressions are fundamentally acts which serve to “other” and dehumanize people on the basis of their marginalized identities. 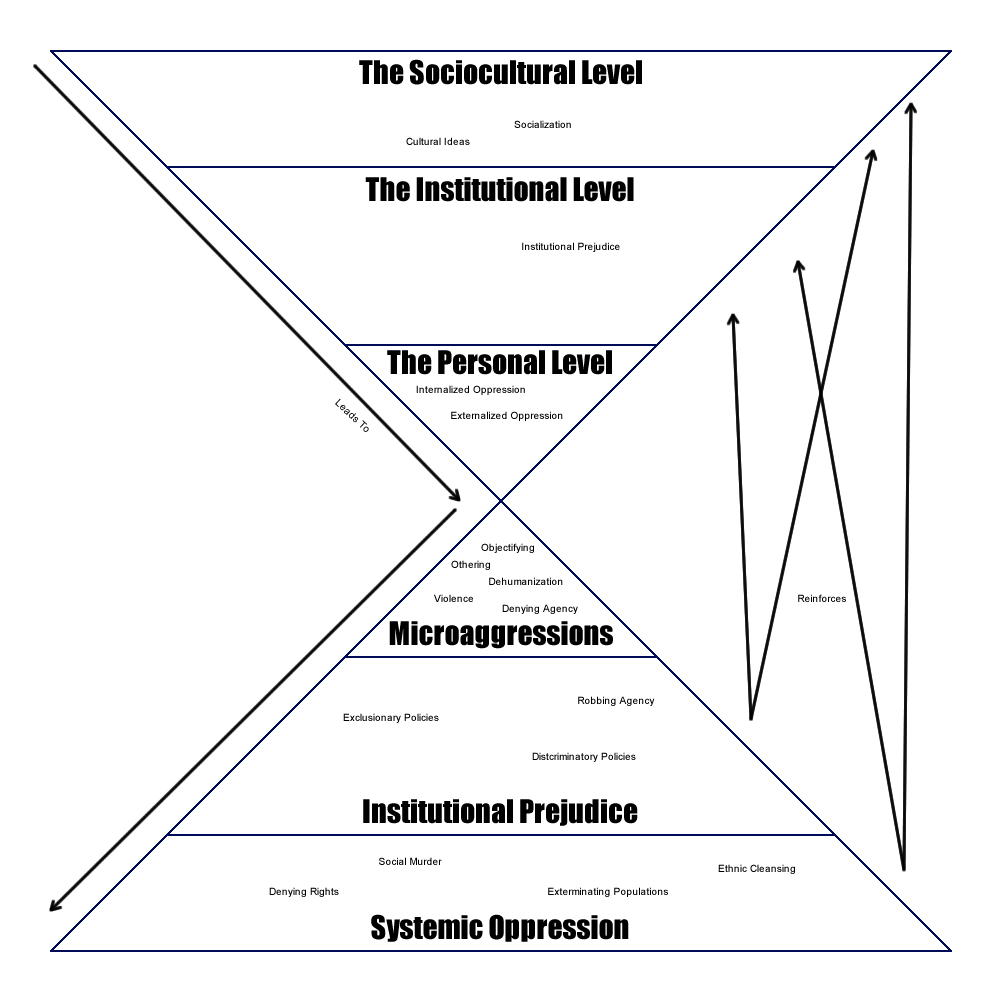 Since systemic racism and systemic sexism are normalized in a pervasive sociocultural way, they are everywhere and they inform everything that happens in our society.

As you can see, the discourses of oppression flow down from the sociocultural level through institutions to individuals. Then individuals internalize and act on those discourses. The actions aggregate to form systems of oppression which constitutes a cycle. This cycle is called the cycle of socialization. Here is a flowchart showing the same process from the perspective of the flow of discourses and actions rather than the structure of the system. 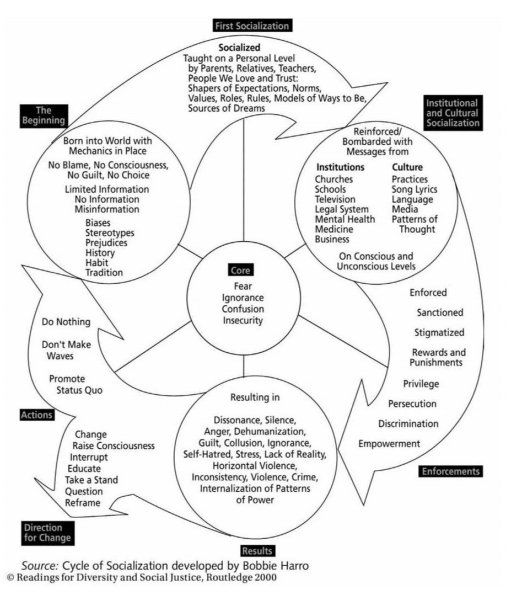 In her book Sister Outsider and specifically the essay There Is No Hierarchy of Oppression, Audre Lorde expands on this idea to explain that while it’s not possible to rank women or black people in terms of who has more or less oppression, we do know that black women have significantly more oppression than black people or women do separately, or even added together. Marginalized identities do not add together when they overlap, but rather they multiply. This idea of the amplification of overlapping marginalized identities is called Intersectionality.

It is therefore helpful to answer the prompt’s question with regard to a specific intersectional dynamic and its expression within the context of the cycle of socialization.

In her essay, Explanation Of Misogynoir, Trudy explains how racism and anti-Blackness alter the experience of misogyny for Black women, specifically. In another essay, she goes into some depth on the specific issue of reproductive rights for black women.

In one sentence, we see how the entire discussion of reproductive rights boils down to a simultaneous down-move against women and black people, but especially against black women.

Anecdotally, I have discussed with colleagues a relevant and recent social phenomena which illustrates the point from another perspective. In social media vanguardism, people like me create content which is intended to arm people with discourses and ideas to critically analyze many of the situations we face together in our culture today. Historically, these types of content are often met with some subset of replies being terse down-moves such as “faggot,” “there are only two genders,” “show us your tits,” etc. During the Trump presidency, we saw a sudden disappearance of those overt replies. They were replaced instead with comments like “Trump 2020,” “blue lives matter,” or “all lives matter.” I submit that in this context, these symbols are a mask to cover up the real intention of the people who use them. And now that Trump has lost the election, this mask has disappeared, and we see a move back to more overt down-moves intended to dehumanize and objectify directly rather than indirectly.

The idea of a public debate about whether or not black women should have agency over their own bodies is necessarily, fundamentally, always racist and misogynistic. It is not possible to ask the question without the implication that it might be true. The agency of humans is not something that can be ethically debated. Consider functionally identical questions like “Are there too many Jews?” or “Is the third world overpopulated?” These questions take the same approach of inviting the reader to question whether some kinds of people really are people, or whether they are objects to be manipulated without agency or ethical concern.

In the article, Why Are We So Afraid of Each New Advance in Reproductive Technology?, author Sarah Richards explains a medical experiment done on Chinese children to introduce a Norwegian mutation called CCR5-Delta32. (I have this mutation as a Norwegian-American.) This mutation confers some HIV immunity onto people who have it. It actually only protects against one of several forms of HIV so it’s not a cure-all and people who have it are only at lower risk of HIV, not completely immune to HIV. The problem is that the scientists did not properly inform the patients of the risks they were undertaking. The scientists robbed Chinese children of agency and treated them as lab rats for a dangerous experiment without informing the families of the risks.

To address the second part of the prompt, in this case, the “We” is anyone within the sociocultural landscape. That means everyone. We all engage with discourses perpetrated by a fundamentally racist and sexist system.

Second, we need to develop actions based on an understanding of theory which create change in the world. This process is called praxis. One excellent illustration of this process comes from Readings for Diversity and Social Justice, the same source as the cycle of socialization shown above…

Learning to critically analyze the discourses we are socialized to, within the context of an understanding of the ethical and philosophical perspectives of marginalized communities allows us to question those discourses rather than running them on autopilot like we always have. Only then can we take steps to challenge the discourses to which our culture is socialized.

The reason our culture is so afraid of reproductive technologies is that our racist, sexist culture is socialized to treat black women as objects rather than people, stealing their agency and giving it instead to white men who are then empowered to rule over them and make decisions for them. Only by learning about the hidden premises and interrogating the power structures which underpin these issues can we break the cycle of socialization and make progress in ameliorating the intolerable conditions facing black people and women in our culture.