Skip to content
One of the huge advantages of anarcho-communist radical queer organizations comes as a deliberate result of the way they were constructed. Early gay leaders like Harry Hay started nonprofits like Mattachine Society in order to advocate for gay rights from within the structures of the political establishment.
At the time, COINTELPRO was an FBI program designed to dismantle these kinds of organizations through infiltration and even assassinations. This happened to many civil rights organizations from black liberation to gay liberation. Harry Hay’s Mattachine Society was dismantled by FBI infiltrators who got elected to the board and fired him, closing the organization.
At the time, Harry Hay was a member of the American Communist Party and a member of multiple Antifa groups. This led him and others to articulate a new kind of activist organization which would be constructed to be impossible to dismantle.
Activist nonprofits are focused on reacting to a status quo by critiquing it hierarchically and calling for incremental change.
In the new era architected by Hay and others, an ancom radical queer organization should be focused first on queering; on the active verb sense of the word, rather than the adjective form. Instead of arguing for legal progress, we should be having queer orgies. Instead of being against our oppressors we should be for ourselves, being the thing we would be without them. Activism becomes secondary.
The key advantage with this new model is the fact that it is fundamentally impossible to infiltrate or dismantle an organization like this. Any hierarchical power in the hands of boards or executives is designed and intended to be weak. Anyone can and should speak out against the decisions of people in power on the basis of the principles upon which these organizations are built. Committee life is horrible, and it’s supposed to be that way because if it’s possible to have Caesars, then the organization will be dismantled. This is the fundamental argument behind this type of organizational structure. 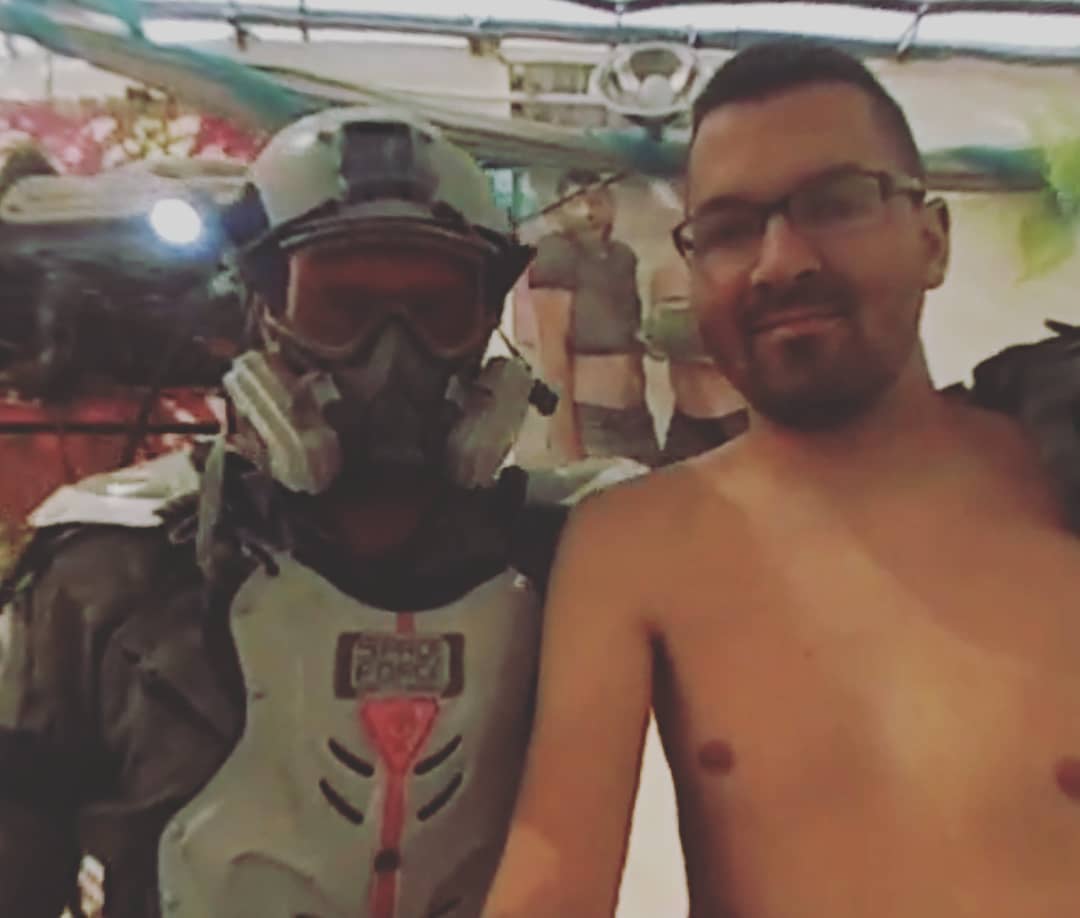 I took this photo of myself at Burning Man with a person wearing a law-enforcement issued respirator who introduced himself by describing clearly fake sexual predilections and then asking where he could get drugs. I believe his exact words were, “I like balls. Who knows where I can get mushrooms?”
Buy-bust is a common law-enforcement tactic; they show up and ask for drugs and then arrest anyone who gives any indication that they know anything about drugs. At Burning Man, the police can use this strategy as the basis for probable cause to conduct searches of entire blocks with hundreds of people based on the argument that these people are associated with the same organization.
Needless to say, this person was immediately ejected by an entire community who knew why he was there and which was carefully designed to thwart exactly this kind of intrusion. This is the strength of having a community-centered approach to activism. If the community notices an outsider who is clearly not a part of the community, then the community can act to insulate and expel threats.