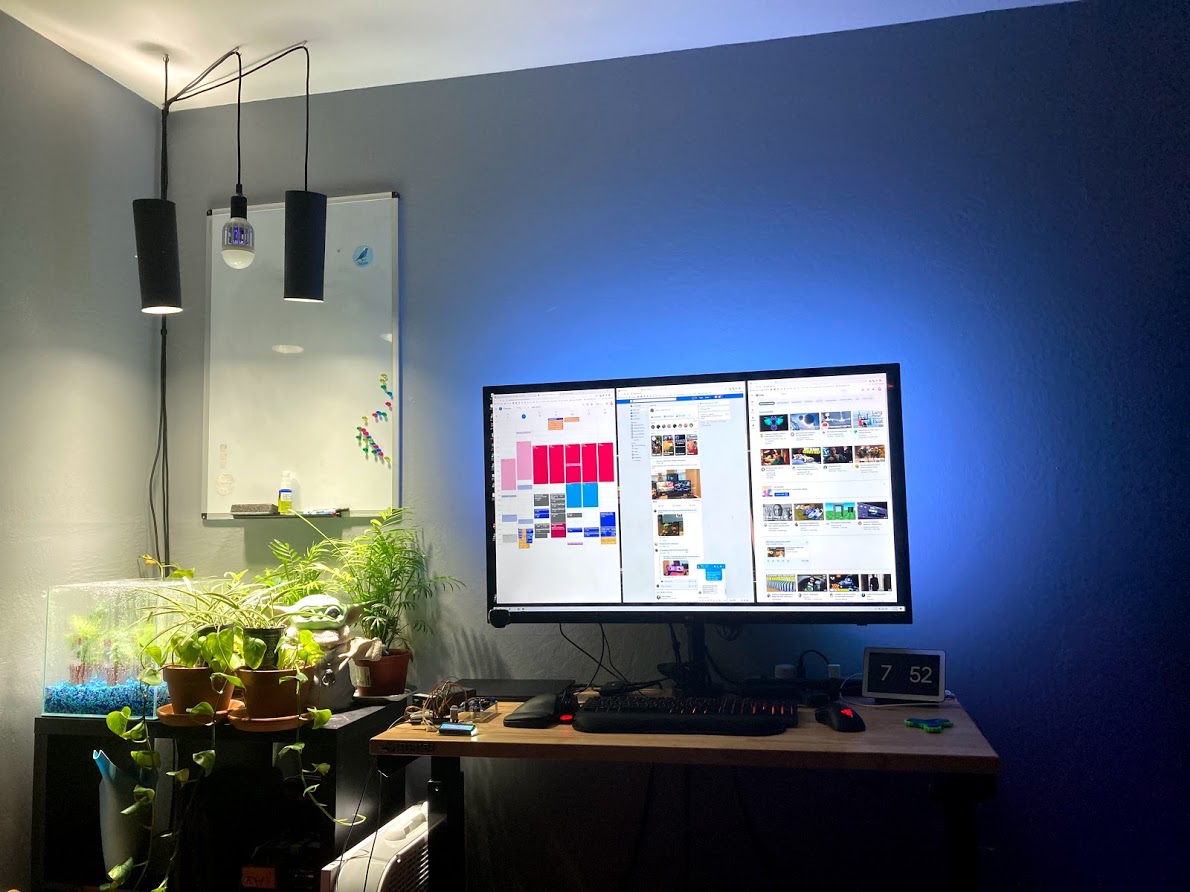 I put this battlestation or “yaddlestation” together for several reasons related to a number of projects but I had some questions about this setup so I wanted to do a sort-of roll-up post about all of it. Notice baby yoda watching from among the plans and inspiring the name.

First there is the computer which is actually a laptop connected to a USB-C dock. Basically anything with a USB-C port can drive all of this; a phone, a laptop, a chromebook, etc. Once a device is plugged into the dock, it puts out HDMI to the TV as well as USB to a hub. The hub drives several accessories;

The desk is a Husky sit/stand desk which can go up and down. The TV is mounted via this stand.

Next to the desk, you can see a terrarium containing a number of ferns as well as several other houseplants including spider plants, pothos, and parlor palms. These are sitting on an Ikea 2×2 Kallax shelf. The terrarium also contains this fogger which has the side effect of improving the humidity in the room. The lights for the plants are these high-intensity led spot lights. I made the shades with black paper.

Behind the TV is an RGB led strip light which is using this wifi controller. I like this controller because it works without the cloud so it is very easy to work into various other projects and it would work off-grid. It also connects to IFTTT and Google. I also set up the macro keypad to run the scenes for the lights and fan so it’s easy to control everything in a quick and simple way.

Between the desk and the shelf, there is a 20×20 box fan which has behind it a 20×20 whole-house filter rated at the same quality as N95. This will come in handy once the fires start.

I also have a Google home hub which can control all the smart things but which sadly will not work without an internet connection. I am therefore considering replacing it with a Mycroft.

The first stop for electricity is a 1500 watt UPS. This protects all my stuff from surges as well as from outages. The second stop for power is the smart plugin strip which controls the plants and the filter/fan. This means when my alarm clock goes off, everything automatically comes on and when I go to bed, I just say the word to the Google home hub in order to turn off the lights and turn on the filter/fan.

I have a Synology NAS on the shelf to the left side which has eight terabytes of documents and media stored on it. A power outage is a serious danger for a NAS, so the UPS allows the NAS to operate safely and shut itself down without losing any data in the event of a a power outage.

The NAS is running Plex plus BTSync which automatically mirrors all my devices onto the NAS in real time. This makes it super easy to access any photos I’ve taken or files I’ve downloaded regardless of which device they are on or which device I am using. It also means nothing ever gets lost. I mirror the NAS to dead storage on an external drive once a week and run antivirus and anti-cryptolocker software on the NAS to make sure my data stays safe.

Because the laptop and NAS use very little power, they could run off the UPS for many hours without outside power and internet. This is a huge improvement over other designs I’ve used in the past. I decided to experiment with this design because I intend to eventually move into an RV and travel indefinitely. This design means it will work even if I’m in some remote area with no internet or outside power.

I think in the future once I get an RV, I will move towards a more hierarchical network architecture with a load-balancing router at the top in order to automatically switch between satellite, GSM, and wifi as sources of internet.