Things are about to get a lot worse. Once numbers start to appear about how many businesses will never reopen, then we will fall off the cliff.

Crisis Theory says a crisis happens when the countervailing forces overpower the prevailing forces; then there is potential for either fundamental change, or starting over and trying the same thing again. America is just one crisis after another, always escalating. This is perhaps the biggest one yet.

Things are about to get a lot worse. Once numbers start to appear about how many businesses will never reopen, then we will fall off the cliff.

We already had negative inflation combined with near-zero interest rates before the crisis started, which means even a competent government would have essentially has no power to solve or improve the situation.

Small businesses were already over-leveraged with variable rate debt, so raising interest rates would only speed up the collapse and make things worse. Most small businesses were borrowing at the maximum they could pay back because we were at the height of the market. This means as soon as there is a decrease in business, they fold.

California Governor Gavin Newsom says unemployment will hit 25% in the next few weeks which is higher than the peak of the great depression. This means people won’t have money to spend at small businesses, so small businesses will close. All of these dominos point towards long-term global collapse which will likely take a decade or more to climb out of.

We have spent a billion dollars a day for the last twenty years on “the war on terror,” or about six trillion total. Trump has spent that much in the last few weeks with the only goal being to push the collapse until after the election. The problem here is that instead of spending the money in smart ways that could minimize the damage, he is spending it on bailing out investors through QE. This means the investors will escape with their fortunes just in time for everyone else to lose everything, and with no money left to actually work on solving the problem.

It’s going to be very bad from every angle.

To connect these dominos back to my original point, one good example of a prevailing force is over-exploitation of housing and stocks. In the first case, 75% of Americans can not afford rent as shown below. In the second case, even though Tesla only made $4b this year, it’s stock price values it at $140b. This ratio is absolutely absurd except at peak market hysteria. Seeing ratios like this is a good sign that things are about to collapse.

The countervailing forces include wages which are so low that the vast majority of people could not afford rent even before the crisis. Here is some original research I did last week for an Urban Studies class comparing income to housing prices. As you can see, almost nowhere in America can the bottom 75% of people afford housing. 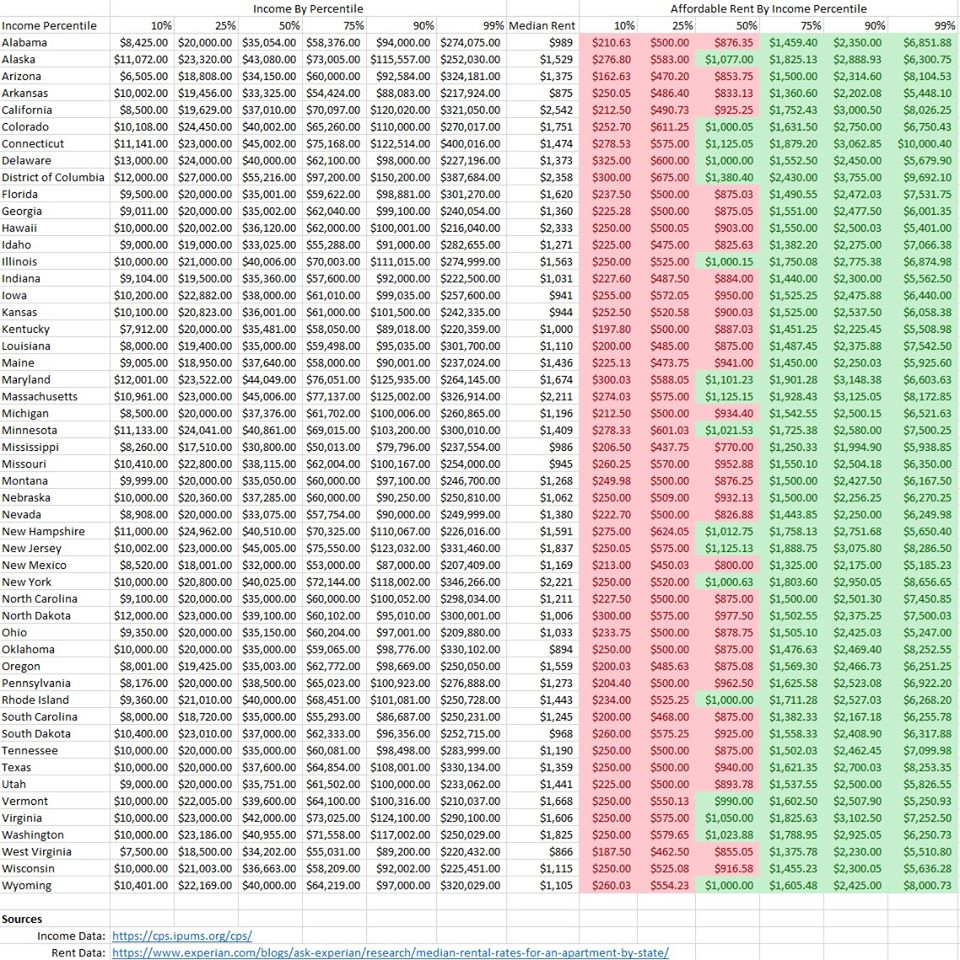 There comes a point when enough people can’t survive the system, and the system stops working. People may refuse to comply, or they may simply no longer be capable of complying. While there are many cases of rent strikes, Amazon strikes, and other workers and tenants refusing to comply with the system, I suggest that the latter case is almost upon us and likely to be far more significant.

Add to this the fact that hurricane season is starting early, and officials say this will be the worst fire season in history, just like last year was and the year before that. Notice I haven’t even mentioned the pandemic at all in any of my comments. 🤣 that’s just the seasoning on top of the dumpster fire we are in.

I originally made this argument two years ago. If Trump hadn’t done huge tax cuts for the wealthy, this crisis would have happened then. He pushed it back by several years, but it’s well past the point of no return now, and things are only going to get worse.