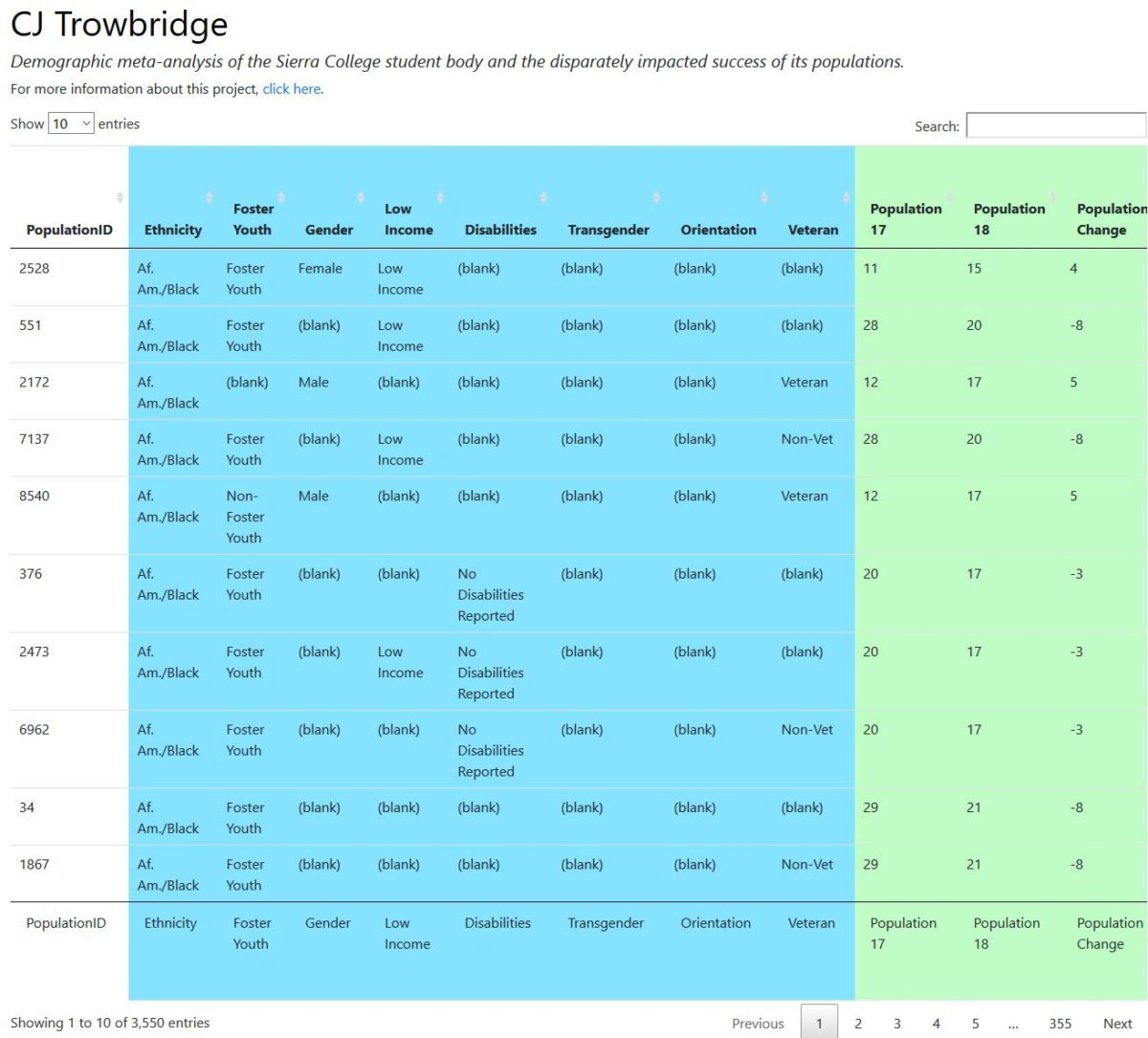 During the fall 2019 semester, I completed a sociology internship at Sierra College. At some point in the last year, I had asked several professors which populations are the most impacted at Sierra College (Which group has the lowest success). I was surprised to learn that no one knew the answer. Further research led me to learn that there was no current way of searching the data for the answer to this question. I set out to create a list of all populations which could be filtered and sorted by success.

For nearly all of the most impacted groups, their identities are not addressed by this arbitrary structure, and their success metrics are getting worse, not better.

In many cases, the current system seems designed to hide the problems or make it difficult to see them. The college works hard to exclude third party experts from critical processes and to suppress important data related to the success of impacted populations.

What Is Disparate Impact?

Disparate impact means that people in some groups do not succeed to the same degree as people in other groups do, on average. Equity gaps measure how big the difference is between the lower success of some groups versus the higher success of some other group. In sociology, this is a major field of research. California recently passed new rules which base funding for schools on how well they close these gaps over time.

In sociology, we track several major impacted populations. We know for example that marginalized classes (such as people of color, women, transgender people, and others) will have disparate impact because these groups are suffering marginalization in society. Black people will be impacted versus white people. Women will be impacted versus men. Typically these differences are measured in terms of life expectancy, income, housing stability, etc. In this case we are measuring success at Sierra College for each group.

Who Is Most Impacted?

At some point in the last year, I asked several professors which populations are the most impacted at Sierra College. I was surprised to learn that no one knew the answer. Further research led me to learn that there was no current way of searching the data for the answer to this question. One could, for example, check the success of “gay black transgender students,” but there was no list of all the populations which could be sorted by their success metrics.

During the fall 2019 semester, I completed a sociology internship at Sierra College. The project was to build a new way of analyzing disparate impact. Over the course of the semester, I created a new database which contains all the public success data for all the groups which are large enough to be reported. A law called FERPA says that we can not report the success of populations with a size smaller than ten.

Initially, I tried to execute this analysis through the school’s research department. FERPA became a favorite roadblock which would be raised when I asked questions or asked for data. “[We can’t answer that because the answer could include data about groups with population sizes fewer than ten, so it would violate FERPA.]” When I followed up to suggest that we simply include the population size in the results, and remove any results where the size is less than ten, the response was that this would be infeasible. I quickly decided to simply conduct the meta-analysis myself.

My final report is available here. Demographics and population size are listed for all the populations, while success metrics are listed to the right. The data can be sorted by any value, and filters may be used in the search box. Additionally, I have also published the database as well as the tools I built in order to complete this project. Free tools such as SQLite Browser will allow anyone to query and analyze the database further.

The system of looking only at one dimension of identity at a time while not comparing them to others or including multiple dimensions leaves huge blind spots for the people working on closing equity gaps. I see two main problems that come from this  blind spot;

In all of these examples, almost all of the intersectional groups show success going down, while success for the corresponding one-dimensional identities is going up. This is a critical flaw in the current system. When white women and black women are categorized together, the average looks like women are doing ok with a 0% change this year. But in reality, black women are seeing low and decreasing success while white women are seeing high and increasing success. The average is inaccurate and ignores the fact that people have intersectional identities.

My interviews with the equity committee members have highlighted another problem. Since these committees are not funded, they have to spend most of their time fundraising, and then typically, some time each year is dedicated to throwing an event to highlight the problems facing their communities. At no point in the year are these committees actually working directly on improving success. They are focused on community engagement, a prerequisite for success. If these committees were funded, they could focus on the actual work which they ostensibly exist to do, instead of focusing on fundraising. One idea that came up in interviews was that the committees could create proposals for projects or programs which would work to increase success. Then they could be funded by the district to execute these projects, since this is the basis of the district’s funding under the new funding formula.

The value of third-party experts can not be exaggerated in this work. One student organization, “Salaam Sierra” is lucky enough to have a chaplain who comes in to work with them. This person is aware of resources at Sierra and throughout the broader community, they retain institutional memory as members of the organization come and go, and they can advocate for the organization on campus and in the wider community. All student organizations, academic committees, and other groups focused on equity and success should have expert third party representatives to facilitate their work.

On broader issues as well, there are opportunities for third party experts to improve the success of students by partnering with student organizations and equity committees. Examples include;

We need independent third party experts to be invited and welcomed and included to participate in engagement centers and student organizations as well as academic senate committees and especially equity committees. Imagine that clubs for example must have not just a faculty adviser but also a community adviser; suddenly the black student union has a club structure which requires them to seek out a community activist or leader who can give them far more resources and support than whatever faculty member had time to be their adviser. As far as academic committees go, it’s unrealistic to expect that we have a committee for each of the 4,000+ impacted populations we are reporting on, but it’s not unreasonable to have a more intersectional set of third-party experts included in the process of addressing impacted success.

Let’s quickly illustrate a far-superior alternative to the current system. Imagine each of the current committees had a member tasked with working on each of the eight demographic dimensions. So now there is at least one person on the Gender Equity committee who is monitoring the success of each ethnic group. For example, not just women but black women and latin women and pacific islander women, etc. Another committee member could be charged with looking at Foster Youth status; how are women who were foster youth doing as compared to those who were not foster youth? Discussions between these two members would be far more attentive to intersectional challenges (while also suddenly addressing all ten of the most impacted populations) than the current model where both members are talking about women in the abstract, and potentially ignoring the fact that there is no woman who is without race or foster youth status.

Perhaps the most important piece of future work on this topic could be incorporating more demographics data about student populations. In many cases, Sierra College is not even tracking critical demographics data about student populations. For example, a student is only counted as disabled if they ask for an accommodation which is subsequently approved by the college. A student who shows up for class in a wheelchair while struggling with severe depression but does not ask for any accommodation (or whose request for accommodation is denied) is not counted as disabled according to Sierra College. This needs to change.

Additionally, Sierra College is not currently reporting all the required success metrics as listed by the California Community Colleges. Specifically, there are enormous swathes of data missing from the public website. In some cases, metrics are omitted entirely. For example, there is no mention of the required metrics “number of students who complete nine or more career education units,” or, “number of student who have attained the regional living wage.” In other cases, entire years of information are simply left blank where the data is reported at all.

Additionally, many longitudinal metrics are falsely reported as static by the school. For example, we have no way of determining the success of students who come out as LGBT at Sierra College because the school does not update this critical longitudinal demographic data. Instead the school falsely reports these longitudinal values as static when students enroll, as though these metrics do not change. So a student who comes out as gay or transgender at Sierra will be counted as straight or cisgender for their entire career at Sierra. Since these are already deeply impacted populations, their suffering and marginalization is going completely unreported by the school. It’s not clear to what degree this false and inaccurate reporting may be deliberate. The problem has been raised by interested parties and stakeholders on multiple occasions in recent years, to no change from the school.

Filling in these data gaps and correcting deeply unjust metrics would make important work for future researchers and activists at Sierra College.

Lastly, the work of updating and publishing this data should be conducted by the school’s research department. Students should not have to take unpaid internships and work for months in order to answer basic research questions which the school should already be reporting through its well-funded research department which ostensibly exists for this purpose. Because of the claims made my the research department that this sort of work is unfeasible, and the fact that a student was able to conduct it without any internal access based solely on public data, I have also included all the tools I built to conduct this research so that there is no further excuse not to do this, and to allow other activists and students to conduct further research of their own.