This week’s topic is based on an interview which you can listen to, here. I recommend listening to it, it’s a great interview! I have condensed the main points for discussion here;

Philip Zimbardo is the former president of the American Psychological Association. From the interview, “[Zimbardo] is one of the most distinguished psychologists in the world and a professor emeritus at Stanford University. He is arguably best known for his 1971 Stanford Prison Experiment, in which students were turned into mock prisoners and guards for a continuous 24-hour-a-day study. The experiment was planned for two weeks but terminated after just six days.”

Othering: using language to dehumanize groups of people. Common examples include “druggies,” “stupid people,”the homeless,” and the use of racial or other slurs. Othering makes groups of people into abstract concepts, deserving any evil thing said or done to them. According to Zimbardo, this is the number one cause for people or groups of people doing evil things.

Delegation of Authority: Examples include “I was just following orders,” or “it’s my job.” These phrases are used to release one’s responsibility for doing the right thing by delegating the responsibility of one’s behavior to an authority. According to Zimbardo, this is the number two cause for people or groups of people doing evil things, and it often reinforces and compounds the effects of othering.

In The Milgram Experiment, a normal and psychologically healthy volunteer was placed in front of a control panel and asked to read a list of questions to a “subject” who was in another room, via an intercom.

Researchers explained to the volunteer that the subject in the other room was hooked up to electrodes and that each time the subject responded incorrectly to one of the volunteer’s questions, the volunteer should flip another switch on the control panel. The switches would electrocute the subject as punishment for the incorrect answer. Each successive switch increased in voltage to the point of being potentially lethal. They were labeled as such.

Before the experiment, Milgram asked psychologists to predict how many volunteers would go all the way to the end and deliver the potentially lethal shocks to the subject. The consensus was that 1% of the volunteers would do so, since one would have to be a psychopath to potentially endanger the life of another during the course of the experiment.

In fact, though the subject would scream and beg for the test to stop because they had a heart condition, more than two thirds of volunteers went all the way to the most lethal dose of electricity.

Zimbardo, who was one of the researchers working on this experiment, attributes this result to the deliberate dehumanization of the subject by putting them in another room and referring to them with the abstract term subject rather than person. In this case, the effects of othering are compounded by Zimbardo’s number two cause of evil, the delegation of authority. 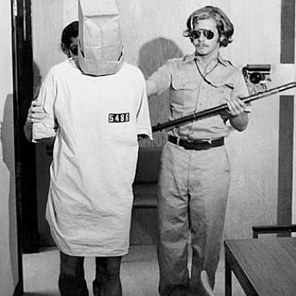 Decades later, Zimbardo conducted The Stanford Prison Experiment. He put normal and psychologically healthy student volunteers into groups of “guards” and “prisoners.” Prisoners had their faces covered and were only allowed to use a prisoner number instead of their names. The goal was to see what would happen when one group was given power over another group which had been deliberately dehumanized.

The groups were told to play out their roles in the simulated prison for two weeks while their behavior was recorded by researchers. Many of the participants had complete emotional and psychological breakdowns in just a matter of days. The behavior of the guards became both physically and psychologically evil to such an extreme degree that the researchers were forced to cancel the experiment after just six days.

When the researchers told the prisoners the experiment was over, the prisoners didn’t understand. They had to go through extensive counselling and therapy before reclaiming their real identities and rejoining the outside world. Several movies and many books have been made about these events.

Decades later, almost the exact same scenario played out in a real prison, Abu Ghraib. Guards covered the prisoners’ faces, gave them numbers instead of names, and committed acts of evil ranging from pointless physical violence to sexual assault.

Because of these examples and lots of other research done by Zimbardo, he has concluded that dehumanizing people is the most effective way for a normal person or group of people to do evil things.

Conversely, he concludes that an awareness of this fact can allow someone to be heroic versus evil by discouraging othering and nipping evil in the bud.