I will show you how to combine several products to get cheap and truly unlimited worldwide cell phone service.

What is Google Voice? This is a completely free service which allows you to make calls and texts from any web browser or from your cell phone, to and from your main phone number. 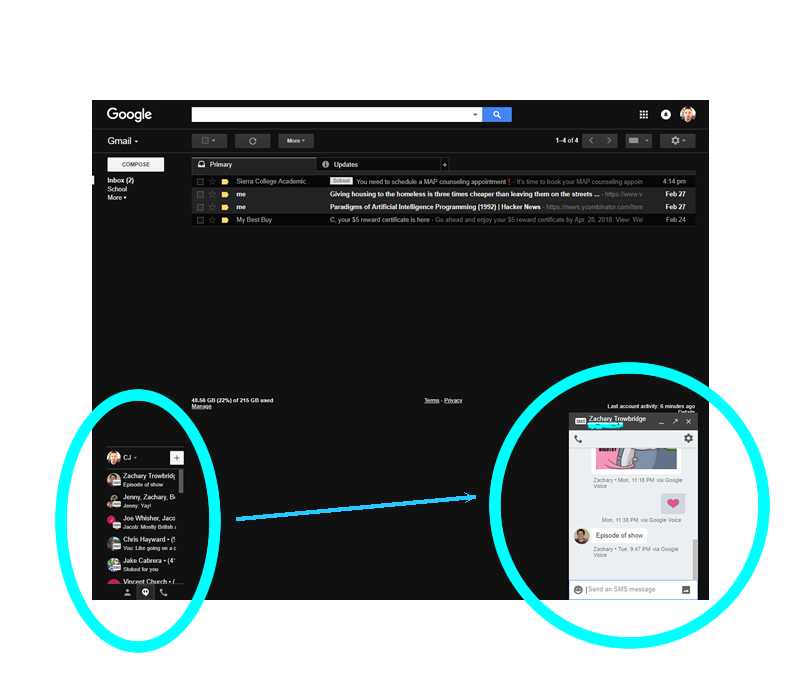 A long time ago, I was very frustrated about not being able to text and call from my phone while in St Thomas. This is a territory of the US which has excellent internet service in the cafes, but no service for people with US cell phone plans. It was so ridiculous and frustrating to be able to use Facebook just as easily as at home, but not to be able to call or text.

Google Voice solves this problem. I ported my same phone number I’ve had since I was 14 into Google Voice, and voila, I was able to call and text from my phone the same as before, but now I could ALSO call and text from Gmail as shown in the pic above. (This texting and calling also works in many other Google web apps like Contacts, Hangouts, Inbox, etc.) Both of these work anywhere you have an internet connection. If I am at a friend’s house in the mountains and there is wifi, I can text and call no problem. If I am in another country on data or wifi, I can text or call no problem.

In fact anywhere in the world where I have wifi or data, I can call and text from any device I am on, not just my phone! Unlike other web based texting solutions like MightyText (Which allows you to text through your phone via the web), Google Voice is truly web based. So even if your phone is off or broken, you can still use Gmail to text and call because your phone number is not tied to your phone. You can simply hook your headphones or bluetooth into your laptop and make calls and texts through the website as clearly and simply as through your phone.

For years, I have used Google Voice in conjunction with a T-Mobile unlimited data plan. I have my same original phone number still tied to my phone through Google Voice; I can still call and text just like always. There wasn’t really any noticable change on my phone, but now I can also do everything on ANY device I am logged into.

This is an optional step which may not work for everyone. For years, I used Google Voice without Google Fi and it was great. The only reason I am adding Fi now is because I will be spending time overseas, and at this point Google Fi is a better deal than T-Mobile based on my usage.

Google Fi is a cell phone service from Google. They send you a sim card to put in your phone which gives you service anywhere in the world. In my case, it replaced T-Mobile as the data provider for my phone. My cell phone number is still with Google Voice.

THIS IS THE TRICKY PART.

Google only officially supports people using Fi on Google phones. But Fi is a sim card. It works on essentially any device that can accept sim cards and supports the modern bands. Also Google doesn’t want you to use both Fi and Voice. They want you to use one or the other.

Google’s official documented solution for people who want to try Fi on non-Google phones is to that we should create a second Google account to use for Fi only. Sign up on the website with this second account and they will send you a sim card.

This process is confirmed to work on essentially any modern phone from iPhones to my LG V20.

So now your phone has data anywhere in the world, and your phone number works on any device you log into, including your phone and laptop.

Some people have reported eventual problems with non supported phones. I have been using Fi all day today and so far I have had no problems. I will report back once I have further updates about my Fi experience.

Please let me know about your success or troubles in the comments below!