Once you have your FQDN forwarded to the VPS, create a directory for it with;

Now we make a new virtualhost conf file with this command. Again, substitute your fqdn;

Then edit the file with nano /etc/apache2/sites-available/[fqdn].conf

It needs to contain the following;

If you want to setup automated backups, create a new directory for the backups;

Or if you would prefer weekly updates every Sunday night, use this instead;

Many of my apps send lots of emails, so I usually need to setup a local outbound email server.

Now edit the config files and change the interface to loopback-only like so;

At the end of the file, make sure there is a line that starts with root and ends with your email, like so;

Save the file and exit. Then run newaliases to let Postfix apply the changes.

Restarting Postfix is not enough because we changed the interfaces line in the config file. We need to stop and start it like so;

When initially setting up a VPS, I generally install the programs listed below. Before installing anything, it is important to first update and upgrade all packages already installed on the server with apt-get update && apt-get upgrade

This command will do all of these things without prompting in between;

You will be prompted to create a MySQL root password. PHPMyAdmin setup will ask you for this password, as will the MySQL Secure Installation tool.

Once you have a VPS deployed and know its static IP, you can forward a FQDN to it by creating a new A Record. I use GoDaddy for my DNS registration because they are simple, reliable, and quick.

I like Digital Ocean (Referral Link) for my VPS host.

The first step in creating a new VPS is to select a Linux distribution. I always use the most current version of Debian. At the time of this post, that is version 8.3 x64.

Decide on an FQDN and use it as the hostname and hit deploy!

It should take about a minute and then you will receive an email with the temporary root password. Use putty to log in, and you will be prompted to change it.

Make sure to choose a root passsword with a high level of entropy.

I wanted to create a new chat server for my company for two reasons. For one, we want any confidential information to stay as in-house as possible. And two, we wanted web access because lots of our employees move around between different offices and they don’t want to have to install chat programs every day.

We had previously been using OpenFire hosted on a local baremetal machine which did not have a CA signed cert. This meant we could not use OpenFire’s web access tool in order to access the chat tool because it did not support self-signed certs. Trillian could be talked into supporting self-signed certs, but a more elegant solution was called for.

I decided to create a new jabber/xmpp VPS with DigitalOcean (Referral Link) and install OpenFire and SparkWeb.

We have officially migrated to Slack as a company. This provides compliance with all the various requirements of our many managed services clients. At long last, this service has been outsourced to a competent partner, and it is one less thing we need to worry about!

Nevertheless, this guide will show you how to create a simple, free alternative with Jabber/XMPP.

Another department at Tech 2U performs diagnostics on lots of computers. They use a proprietary tool that they built which deploys diagnostic tools on customers’ computers during tech support services.

This tool was built years ago by someone who no longer works here. He used a baremetal Apache server to host the tools. This server crashed, crippling the tool and everyone who relied on it.

I decided to move the tools to a new cloud VPS.

I created a new Droplet on Digital Ocean (Referral Code) for $5/month.

I chose Debian 8 amd64 for the OS and set a hostname of the new fqdn.

Once I created the droplet, I pulled its IP and created a new DNS A-Record on our main domain account to forward that hostname to the new VPS.

Now the VPS was finished building so I ran apt-get -y update && apt-get -y upgrade to update any packages that have changed since Digital Ocean built their image for this type of server.

Now we make a new virtualhost conf file with this command. Again, substitute your fqdn;

Then edit the file with nano /etc/apache2/sites-available/[fqdn].conf

It needs to contain the following;

I also created another virtualhost to server the /var/www directory. This virtualhost will be secured with a directory password and contain some diagnostic and performance monitoring tools.

Now I disable the default VirtualHost with a2dissite 000-default

Then enable my new virtualhosts with a2ensite [fqdn]

If you’re not already familiar with BitTorrent Sync, it is a free, secure option for synchronizing directory structures in real time. I use it to synchronize the app between different web servers. Any changes are immediately propagated everywhere. This is also the vehicle for delivering updates to the server from the people who manage it.

This command will download the script to install version 1.4 of BitTorrent sync. Note that this is not the most recent version, as the new version is very limited in features and requires much more resources to run.
sh -c "$(curl -fsSL http://debian.yeasoft.net/add-btsync14-repository.sh)"

Now we need to clean up any permissions and ownership issues with the following commands;

Then we configure btsync to synchronize the app’s folder, and it does the work of importing the app.

Now I simply add the old BitTorrent key to the correct directory and then all the files copy over! 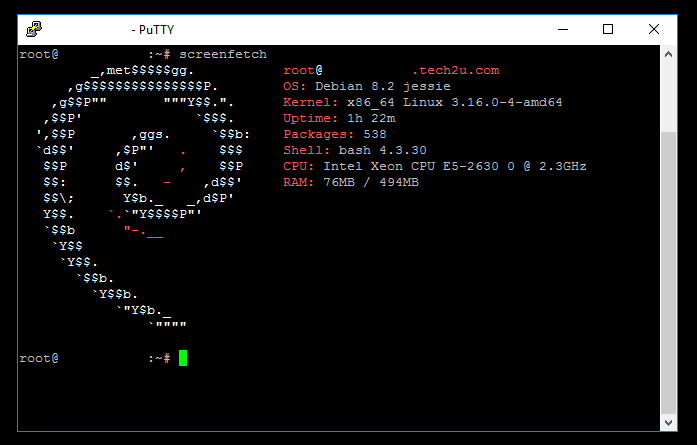 I have spent the better part of the last three years building a scalable logistics platform which has grown to manage nearly all the daily operations of my workplace, a mobile tech support company.

As it grew, it became more mission-critical.It currently provides essential infrastructure to many employee roles and daily operations.

A recent series of power outages proved that hosting it in-house was a bad idea, so I have begun to work on a solution: migration to the cloud.

When I started developing software at my current workplace, our web app server was running Turnkey Linux on Debian 6 inside a hypervisor running VMware ESXi 4.5; all of these tools were already very obsolete when I joined the development environment, and after over two years, it was time to make some changes.

I decided to move to a modern, open source hypervisor and the current version of Debian without the hundreds of irrelevant packages that come with Turnkey Linux.

I started by creating a new VM and installing Debian 8 with Apache, PHP and MySQL and then I migrated all the PHP scripts and the database over from the old web app VM to this new virtual server.

Now it was time to create a temporary hypervisor while I upgrade the current physical server. I found a disused workstation from the office and installed XenServer on it.

Both VMWare and Xen have a feature where you navigate to the server’s IP address in a browser and they give you a download for the desktop management tool to let you work with the server. Installing these was simple enough, then I exported all the old ESXi hypervisor’s virtual machines to OVF files, a universal standard format for virtual machine migrations.

Importing them into XenServer took A LONG TIME; I ended up leaving it overnight. But there were no problems on any of the VMs; Windows or several flavors of Linux, everything went very smoothly.

With the new VMs successfully imported, I shut down the old VMs and Started them new ones up. They took over their same static IPs and booted up as though nothing had happened.

Now it was time to upgrade the old VMWare ESXi server to Xen. This process was a lot harder than I expected, and I did encounter two problems trying to get it to boot up for the first time.

Because it was an older Dual-Xeon server, it was missing an architecture feature required for some types of virtualization. It said Windows VMs might potentially have issues. This is fine for me because I am not using any Windows VMs. I looked at Dell’s website and there are no BIOS updates currently available which appear to resolve this issue. It may be impractical to use an older Dell server like this for hosting windows machines with Xen.

Another problem arose because the older hyperthreading architecture threw a non-maskable interrupt parity error which caused a Kernel Panic and halted the machine. It took hours of research and work to solve this problem.

The first step was to disable hyperthreading in bios. Dell couldn’t make this simple; my server’s bios referred to it as disabling the “Logical Processor Feature.” Now the server was able to boot up, though it was only using one core on just one of its CPUs, instead of all the cores on both Xeons.

In order to prevent this Kernel panic, we need to tell the system to skip parity checks for NIM (or non-maskable interrupts). This is theoretically simple enough, but finding the bootloader configuration file proved very difficult as it was not in any of the normal places.

Once in the “Console” section of the XenCenter tool, the next step was finding the bootloader configuration file. This may differ for different versions of Xen, mine is 6.5. I eventually found the file here;

We need to add “nmi=ignore” into the “append” section like so;

After saving this file, I was able to reboot and turn the “Logical Processor Feature” back on, enabling all the cores and CPUs in the server. Then I was rewarded with a happy boot screen; 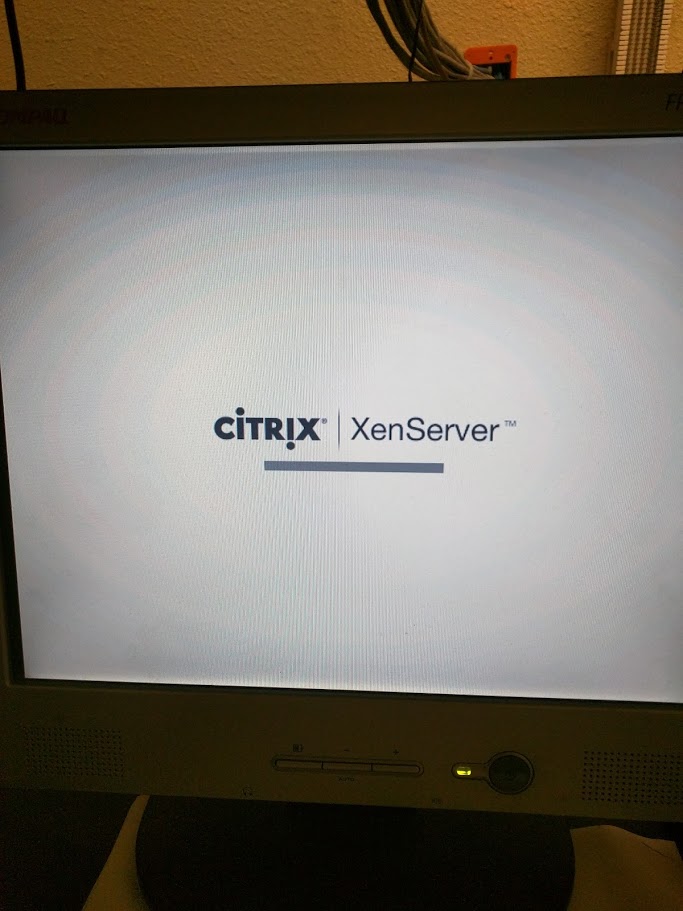 Moving the virtual machines back to this server was as simple as moving them to the temporary one. Now everything is setup and running happily on this new, modern and open source hypervisor! 😀